DULUTH, Ga. (Dec. 17, 2012) — The gift-giving season arrived early for the Piedmont Park Conservancy. On Nov. 30, AGCO (NYSE:AGCO) delivered a new Massey Ferguson® tractor, valued at nearly $50,000 including accessories, maintenance and training, to Piedmont Park. The new tractor joins the Conservancy’s current tractor, a Massey Ferguson 1180, which is used for maintaining, beautifying and improving the park.

“We are thrilled to receive such a generous donation from AGCO,” says Conservancy President and CEO Yvette Bowden. “Support from Atlanta companies is crucial to the continued growth and maintenance of Piedmont Park. Great cities need great parks, and we are happy to have a partner like AGCO that understands the importance of Piedmont Park to this great city,” she adds.

With this contribution, AGCO becomes a member of Piedmont Park Conservancy’s Chairman’s Circle, created to recognize corporations for annual contributions to sustain the park. AGCO also becomes a sponsor of the park’s Green Market, an open-air farmer’s market featuring locally grown produce that runs Saturdays from May through mid-December.

Sponsoring the Green Market is a natural fit for AGCO, a company that focuses exclusively on agriculture. “We build many different kinds of agriculture equipment, engineered with the goal of helping farmers of all types and acreages feed the world,” says Lindsey Pettyjohn, who leads public relations for AGCO in North America. “We’re an agricultural company, based in Atlanta, so naturally we are excited to support agriculture in our community and help educate people about the role agriculture plays in bringing food to their tables.”

The new Massey Ferguson MF1655 tractor will be more affordable for the Conservancy to operate, thanks to its improved fuel economy versus the current tractor. It will also keep the park air a little cleaner due to reduced emissions. The MF1655 is compliant with EPA’s Tier 4i emission requirements, so it puts out more than 60 percent less particulate matter and over 20 percent less nitrogen oxide than older tractors with Tier 1 engines.

Piedmont Park has been an important gathering place for Atlantans, including AGCO employees and their families, for more than 100 years. Supporting the Piedmont Park Conservancy is the latest example of AGCO’s ongoing commitment to the communities in which it operates.

Massey Ferguson is a worldwide brand of AGCO.

Piedmont Park Conservancy is a member- and donor-funded nonprofit working in partnership with the city of Atlanta to maintain and enhance historic Piedmont Park. Founded in 1989, the Conservancy has raised and invested more than $60 million in private funds for Park improvements, and today manages over 90 percent of the overall maintenance and security of Piedmont Park. Newly opened Park amenities include Legacy Fountain and the Promenade, the wetlands, a re-naturalized Clear Creek area, basketball courts, bocce courts, the new aquatic center, the Greystone event facility, an expanded dog park and new lawns. 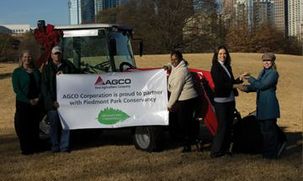