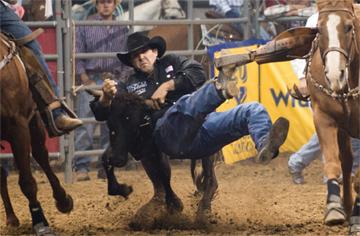 Hesston’s sponsorship of the Professional Rodeo Cowboys Association (PRCA) and WNFR is rooted in tradition, as Hesston began sponsoring the WNFR in 1974. Hesston by Massey Ferguson is carrying on the tradition as the official farm equipment company of the PRCA with high visibility during the event.

“We are proud to be an official sponsor of this exciting rodeo,” says Todd Stucke, director of hay and harvesting for Hesston by Massey Ferguson. “Just as rodeo and hay production have a shared heritage in the West, Hesston’s sponsorship of the WNFR is an important part of our heritage that we are pleased to continue.”

The excitement was high as Hesston guests cheered on steer wrestler Branquinho and bull rider Teel during ten rounds of competition at the WNFR. Going into round 10, neither the steer wrestling nor the bull riding competition had a clear front-runner, making for an exciting evening.

Twenty-year-old bull rider Teel, from Kountze, Texas, made his first trip the WNFR in 2012. The past high school and collegiate champion posted strong rides throughout the WNFR, including winning round four. After ten go-arounds, Teel was able to hold off his competition and win his first world championship Saturday night, an incredible achievement for such a young bull rider.

“We are very proud of Luke and Cody and their performances during the Wrangler National Finals Rodeo,” says Laura Lines, senior brand marketing specialist for Hesston. “Being a part of such a huge event, and seeing our competitors win, has been exciting for all of us. We look forward to sponsoring them again in 2013.”

The WNFR, held in Las Vegas from Dec. 6–15, is sanctioned by the PRCA, the largest and oldest rodeo-sanctioning body in the world and the recognized leader in professional rodeo.

Rodeo at its finest, and more

Along with attending the action-packed rodeo performances and cheering on the Hesston-sponsored champions Branquinho and Teel, Hesston customers were guests for a cocktail reception; a meet and greet with Branquinho and Teel and a private Rodney Atkins concert at the House of Blues.

“The Wrangler National Finals Rodeo is rodeo at its finest, showcasing the best competitors,” says Lines. “Inviting customers to the WNFR in Las Vegas was our way of thanking them for helping make Hesston the best-selling hay equipment.”

For more information on how the Hesston-sponsored cowboys performed at the Wrangler National Finals Rodeo, visit www.nfrexperience.com; or follow the rodeo professionals on Twitter (@lukebranquinho and @CodyLTeel).

For more information about hay equipment from Hesston or to find a dealer near you, visit Hesston.com.

Massey Ferguson is a worldwide brand of AGCO. Hesston is a registered trademark of AGCO.

The Professional Rodeo Cowboys Association, headquartered in Colorado Springs, Colo., is the largest and oldest professional rodeo-sanctioning body in the world. The recognized leader in ProRodeo, the PRCA is committed to maintaining the highest standards. The PRCA, a membership-based organization, sanctions approximately 600 rodeos annually, and there are nearly 30 million fans in the United States. The PRCA showcases the world’s best cowboys in premier events through the Wrangler Million Dollar Tour presented by Justin Boots, and its subsequent Justin Boots Playoffs and Justin Boots Championships; the Seminole Hard Rock Xtreme Bulls Tour presented by B&W Trailer Hitches; the PRCA’s bull riding series; and the world-renowned Wrangler National Finals Rodeo. Action from PRCA-sanctioned rodeos and its premier events appears on Great American Country (DISH Network 167, DirecTV 326) and Pursuit (DISH Network 240, DirecTV 608). Each year, PRCA-sanctioned rodeos raise more than $26 million for local and national charities. www.prorodeo.com 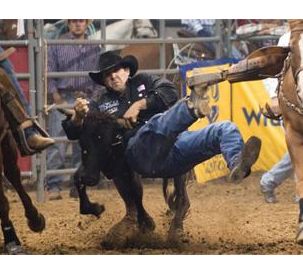