The manufacturing center expansion will contribute more than $17 million dollars and 200 jobs to the local economy, bringing the total number of professional, support and skilled manufacturing positions at the facility to 1,050. Intivity Center, a 17,000-square-foot, state-of-the-art visitor center, is AGCO’s first welcome center in North America, and showcases the farmer-focused innovation behind the brands upon which the company has been built.

Intivity Center offers an extensive collection of historical artifacts — many never before seen by the public. In addition, it includes a glimpse of the future of agricultural equipment through interactive displays demonstrating equipment technology in development at AGCO. Open to the public Monday through Friday from 9 a.m. to 4 p.m., Intivity Center is expected to attract an estimated 10,000 visitors per year.

“Today is a great day for AGCO, and we’re thrilled to bring the production of Massey Ferguson and Challenger row crop tractors to North America for our North American customers and dealers,” said Richenhagen. “This is one in a continuum of efforts AGCO is undertaking through our commitment to deliver superior products, service and innovation as we have never done before.

“AGCO is proud to bring North American farmers the benefit of our global expertise in agricultural equipment, and Intivity Center captures many examples of our efforts, both from the past and those we will be bringing to market in the future,” added Richenhagen.

Crain reiterated the reasons Jackson was chosen as the ideal place in North America to manufacture the company’s row crop tractors.

“There is a long-standing tradition of hard work, commitment and understanding of customer needs here in Jackson. This commitment is evident from the speed with which the team here undertook and completed the construction, and brought the line up to full capacity to produce the Massey Ferguson and Challenger row crop tractors we can now proudly say are ‘built in North America’ for our customers and dealers here,” Crain said. “Thank you to everyone who has made this day possible, particularly our outstanding team of Jackson employees, led by Eric Fisher, director of operations. Jackson and our new Intivity Center are truly the new hometown of Agriculture and Innovation.”

Farm equipment manufacturing has been a part of the Jackson community since 1963, when Ag-Chem Equipment Company was founded as a distributor of spraying equipment. Ag-Chem was purchased by AGCO in 2001. Jackson is now home to Challenger and Massey Ferguson high-horsepower wheeled row crop tractors as well the Challenger track tractors and application equipment.

For more information about Intivity Center and AGCO Jackson Operations, or to schedule tours of the expanded manufacturing facility, visit IntivityCenter.com. For information about AGCO’s products and services or to find a dealer near you, visit www.AGCOcorp.com.

Intivity Center, the official visitor center for AGCO's Jackson facility in North America, is now open to the public for tours. This is a destination for agricultural equipment enthusiasts of all ages, particularly those who are loyal to brands such as Massey Ferguson® and Challenger®, as well as RoGator® and TerraGator® products. Reservations are being taken through a convenient online process at IntivityCenter.com.

Intivity Center features a wealth of displays detailing the evolution of agricultural equipment and the many foundational innovations that are still in use today. Displays include interactive videos and many never-before-seen historical artifacts as well as futuristic, animated exhibits of products from AGCO that are in development around the world.

“We don’t want to give away too many details, but instead invite everyone to come and experience Intivity Center for themselves,” says Phil Jones, creative manager and a key visionary behind the Intivity Center exhibits. “Whether you’re interested in the history of agricultural equipment or in seeing firsthand the dreams of today’s innovators, it is packed with surprises and is a destination you’ll want to experience for yourself.”

Intivity Center is located at 202 Industrial Parkway, Jackson, near the intersection of Interstate 90 and U.S. Highway 71 in southwest Minnesota.  The Center is open Monday through Friday from 9 a.m. to 4 p.m., with walking tours of the manufacturing facility available Monday, Wednesday and Friday. Intivity Center is free to the public and open to visitors of all ages; however, manufacturing center tours are available only to ages 12 and up and require reservations.

For more information about Intivity Center or to make reservations to tour the AGCO Jackson manufacturing center, visit IntivityCenter.com 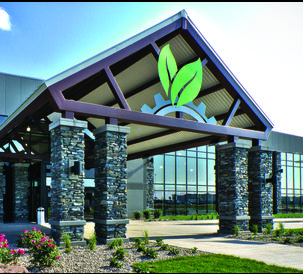