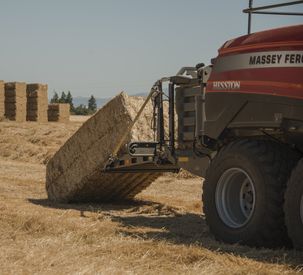 The Hesston by Massey Ferguson® 2370 Ultra High Density (UHD) baler has been created to meet the needs of large commercial hay growers, operations that export hay and biomass material and businesses harvesting biomass for the North American biofuels and livestock feed industries.It will make its North American debut at the 2018 World Ag Expo in Tulare, Calif., Feb. 13-15.

This new baler is designed specifically for producing heavy, dense bales from light-weight, dry, slick grass and crop residue that can be hard to bale. It offers the throughput and reliability large operations require when harvest windows are small, and tons-harvested-per-day is driving an operation’s profitability.

“As their market demands increase, our customers have asked for even more capacity, density and reliability from large square balers,” explains Shaun Allred, tactical marketing manager for hay and forage products at AGCO. “Our engineers in Hesston, Kan., went to work, and the result is the industry’s first Class 8 baler. The Model 2370 UHD makes 3’ X 4’ bales with 20 percent greater density than our industry-leading Model 2270XD baler, and it is built with the durability to run under high loads, covering thousands of acres, bale after bale.” Small and large square balers are ranked in Class 1 through Class 8 using rated plunger load, the most measurable factor impacting a bale’s density. Class 8 is for balers with 750-plus kilonewtons (kN) plunger force, the highest classification.

Key features of the industry’s first and only Class 8 large square baler, include:

Allred concludes, “Overall, this new baler will deliver what is most important to large operations – outstanding reliability and more crop in the bale quickly and efficiently. That means fewer bales to bale, handle, move, store and transport, which cuts operating costs and drives bottom-line returns for the operation.”

Full details will be available as the baler is officially introduced in February at the World Ag Expo. The Model 2370UHD large square baler will be available in 2018 from Hesston by Massey Ferguson and Challenger® dealers. To find a dealer near you, visit Hesston.com or Challenger-ag.com.

AGCO (NYSE: AGCO) is a global leader in the design, manufacture and distribution of agricultural solutions and supports more productive farming through its full line of equipment and related services. AGCO products are sold through five core brands, Challenger®, Fendt®, GSI®, Massey Ferguson® and Valtra®, supported by Fuse® precision technologies and farm optimization services, and are distributed globally through a combination of more than 3,000 independent dealers and distributors in more than 150 countries. Founded in 1990, AGCO is headquartered in Duluth, Ga., USA. In 2016, AGCO had net sales of approximately $7.4 billion. For more information, visit http://www.AGCOcorp.com. For company news, information and events, please follow us on Twitter: @AGCOCorp. For financial news on Twitter, please follow the hashtag #AGCOIR.